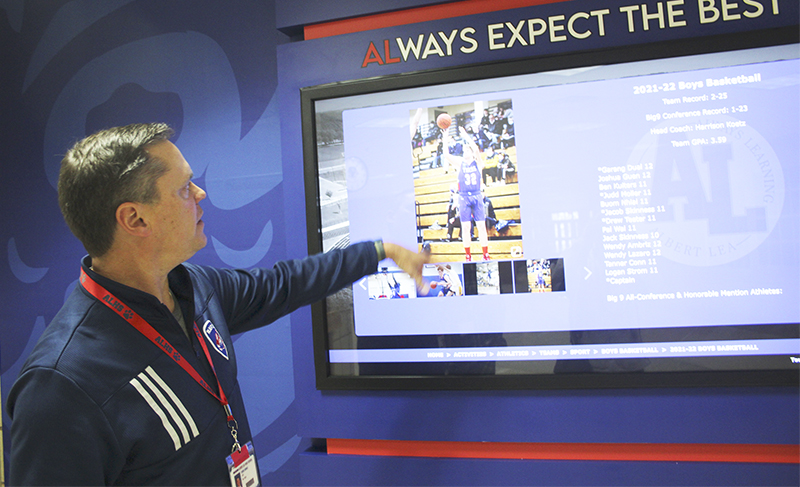 Chris Dibble operates one of the touchscreens installed at the high school near the cafeteria. No taxpayer money was used to finance the project.Alex Guerrero/Albert Lee Tribune

First discussed over a year ago, digital displays have been all over Albert Lee High School last month, and students want to know why.

“Neil [Skaar] I told you when you first entered the building [in July 2021]said Chris Dibble, the high school principal.

One of the first things Skaar brought up was a digital display.

“As a wrestling official, I had time to walk around and see what was going on. [other] Skarl, president of the Albert Lee Education Foundation and member of the Board of Education, said: “Many of them have digital displays that show useful information to students when they walk into the building, such as the day’s announcements, upcoming events, and a constantly scrolling student view at various locations within the building. was displaying schedules related to

And he thought they would be useful for high school.

But as fate would have it, two ALHS graduates in 1995, Scott and Jen Erickson, ran TouchPros, a display screen company. The pair got their hands on his Dibble and the project started last winter.

“They gave us a really good deal,” Skarl said.

The Education Foundation’s role was to find donors who would make significant financial contributions to the project. And the foundation did: Dale Larson. Larson is a distinguished alumnus who was appointed in 2008 and the founder of Larson Manufacturing. Larson he graduated from the class of 56 years.

According to Dibble, between Larson’s contributions and Ericksons’ suggestions, the school has a high-end display system at a very affordable price.

“It really gives the building a premium feel,” says Dibble. “Communication is one of our big cornerstones, so we incorporate the latest technological advances into our buildings to help students become more aware of what is going on.”

He also saw displays as a way for students to connect with the community.

There are plaques on the walls honoring the people, but they are hard to read and only accessible at school, Skarr said.

“Now we have huge display boards where you can find information about these people who are honored athletes, educators and alumni in much more detail than you can see on their plaques,” he said.

In addition to announcements, menus and news, we have access to all yearbooks, which are currently being scanned. The athletic team and activity announcements are also displayed on the screen. People can post and email photos using their smartphones via QR codes.

“It’s a big work in progress,” says Dibble. “There’s a lot of information to put in.”

When complete, each locker bay will have a display, Dibble said, with three in the cafeteria, four in the upper and lower E-houses, and one in the main entrance. He had no timeframe for when the installation would be completed.

The displays were originally scheduled to be installed by July 31st, but due to supply chain issues, the screens didn’t actually arrive until the end of September. Not everything is installed, but it already attracts attention.

The display screens can also be accessed online at albertlea.touchpros.com.

“This will be a website with even more features,” says Skaar. “In relation to our program, it contains the same information that is on our website, but in addition to that information that the general public and students may be interested in. .”

Dibble estimates the total cost of the project at $15,000, with an additional $10,000 from Larson and funding from the Education Foundation, he said, for maintenance. Taxpayer money does not fund projects.

“It’s great to have people like this coming back and wanting to help the community they grew up in,” Dibble said.

He also wanted to thank Mr. and Mrs. Ericsson and Larson for making the project possible.