Norwegian start-up Blastr Green Steel plans to set up a green steel plant with an integrated hydrogen production facility in Inkoo, Finland. Blastr has signed a letter of intent with Nordic energy company Fortum giving Blastr exclusive access to an existing industrial site in Joddböle in his Inkoo, Finland, 55 km west of Helsinki.

Fortum has been developing the Joddbole area since dismantling the Inkoo coal-fired power plant in 2017-2020. (The last controlled implosion of the plant’s chimney occurred on March 24, 2020.) The area has optimal conditions for industrial activity. Deep sea ports and excellent power grids.

The €4 billion investment is expected to create up to 1,200 direct jobs during the operational phase. Production is he scheduled to start by the end of 2026. Blastr’s project, a green steel plant and an integrated hydrogen facility, will be one of Finland’s largest industrial investments.

Green steel is an important raw material in renewable energy infrastructure such as wind turbines, as well as in areas such as construction, the automotive industry and consumer goods. In Europe alone, demand for decarbonized steel is expected to reach 50 million tonnes by 2030. This represents almost a third of current European steel demand.

Finland is the ideal location for our project. It has ambitious low-carbon targets, predictable operating conditions that support green industries, fossil-free energy and a talented workforce. Inkoo was chosen as our location due to its quality infrastructure and access to clean electricity. In addition, the ice-free deep-sea port enables efficient, low-carbon logistics all year round and access to European markets.

The steel industry produces about 8% of the world’s CO2 emissions as it uses large amounts of fossil fuels to produce steel using conventional methods. Currently, about 1.9 tons of CO₂ are produced for every ton of steel produced. Aiming to reduce CO2 emissions by 95% compared to traditional manufacturing processes, Blastr replaces coke and coal with hydrogen in the chemical reduction stage, reducing his CO2 footprint throughout the value chain. increase.

Using green steel produced by Inkoo, we aim to reduce our carbon footprint of 4.6 million tons of CO₂ per year compared to conventional methods. We systematically address all parts of our value chain to reduce our overall carbon footprint, reduce waste and develop circular solutions. Furthermore, our ambition is to secure the majority of our electricity needs from directly or indirectly owned wind parks and contribute through our own investments and partnerships to promote clean energy production in Finland. That’s it. We believe our projects will bring positive benefits to the region and will engage in active dialogue and cooperation with local communities and other stakeholders.

In October 2022, Cargill’s metals business and Blastr agreed to work together to supply the Nordic region with fossil-free steel.

Blastr is founded and backed by Vanir Green Industries (VGI), a Nordic investment company that invests, develops and scales businesses needed to accelerate the energy transition. VGI was founded by Tore Ivar Slettemoen, one of the founders of Freyr Batteries. 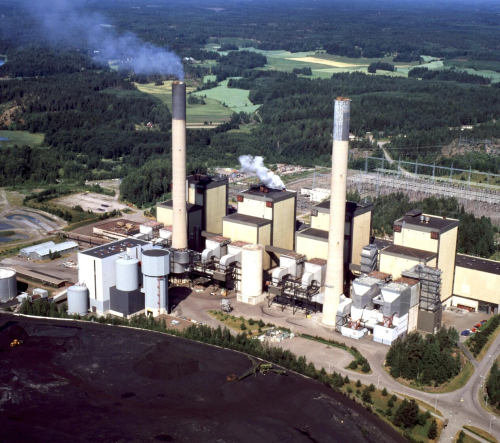 The Yingcu coal-fired power plant, now demolished. The edge of the coal stockpile area visible at the bottom.

Inkoo’s dismantling of a large coal-fired power plant is a prominent example of material recycling. More than 90% of all demolition materials were to be recycled. Technical equipment is either recycled to his Fortum’s own power plant or sold to other power generators as spare parts. Metal from Inkoo is transported to various locations in Finland for reuse. In the spring of 2018, a large amount of scrap metal was transported by ship from Ynkuu to Turkey, where it was melted down and reused in the construction industry.

Concrete generated during demolition work was crushed and washed. It is mainly used for leveling land in power station areas and as a filler for old ash pools.