Cognos focuses on developing drug delivery devices to treat neurological diseases including brain and spinal cancers, as well as neurodegenerative diseases like Alzheimers and Parkinsons disease, epilepsy and stroke.

“Physiological and anatomical properties of the blood-brain barrier make drug delivery to a targeted site in the brain a unique and difficult challenge. The pharma industry has developed effective and powerful drugs that could improve outcomes for brain cancer and other neurological diseases originating in the brain if they could just reach the targeted site with minimal exposure to off-target sites associated with significant side effects,” said Frank Adell, co-founder and chief executive officer of Cognos.

The all-stock deal gives Cognos stockholders $120 million in Nocturne common shares, with each share valued at $10.30. Also, outstanding options and warrants giving Cognos the chance to acquire shares from other sources will be assumed by Nocturne.

Noctune is a Cayman Islands based blank-check company that facilitates mergers, share exchanges, asset acquisitions, share purchases and business reorganizations. It IPO’d in April of 2021.

The principle tech is the SINNAIS smart pump

Cognos’ principle product is the SINNAIS Implantable Smart Pump (SINNAIS). It’s a drug delivery system that sends drugs to the targeted tissue, bypassing the blood-brain barrier, or to other tissues with minimal side effects. The pump is built to make modern potent drugs developed by the pharmaceutical industries more effective with greater concentrations and better bioavailability.

The company is also still in the early stages of developing a skull-mounted optical sensor, which is an implantable shunt that collects data from the disease target site and transits it to a cloud-based infrastructure for analysis. This analysis can help clinicians figure out proper dosages and also help with real-time monitoring. The company believes this could help bring personalized medicine and virtual physical concepts to the forefront.

Cognos intends on entering both the United States and European union markets after regulatory approval. The company has been talking with the U.S. Food and Drug Administration (FDA) about getting premarket approval applications for SINNAIS. More specifically, it would be for infusion of Infumorph into cerebral spinal fluid. The approval would use the six year rule where an application can use clinical data in an existing approval and new clinical data doesn’t need to be developed.

“Cognos’ SINNAIS has the potential to become the world’s first implantable device for local and metronomic delivery of therapeutics for treatment of neurological diseases. SINNAIS will enable unprecedented, targeted delivery of chemotherapeutics for persistent glioma and other solid tumors,” said Henry Monzon, chairman and CEO of Nocturne.

Internet-of-Things and a smart water network

The CES Innovation Awards is a yearly competition that honors design and engineering in consumer technology products. Moen is a subsidiary of Fortune Brands Innovations (NYSE: FBIN), which focuses on branding in the home products, security and commercial building markets.

Smart devices uses internet-of-things sensors generally to collect data for analysis, and Moen’s no different. The Smart Sprinkler Controller lets users create watering schedules and control each zone of their lawn from a smart phone. Basically, users controls how much water each zone gets. They can make seasonal adjustments and even disable watering based on local weather data. That also means the system monitors both water usage and estimated savings.

“The Smart Sprinkler Controller and Smart Wireless Soil Sensors are an important expansion of Moen’s Smart Water Network, providing users with peace of mind in knowing their outdoor irrigation system is being monitored 24/7,” according to Joy Trillet, associated product manager for the Moen Smart Water Network. “In fact, the Smart Sprinkler Controller can reduce an average home’s irrigation water use by up to 30 percent, saving the home up to 15,000 gallons of water annually compared to a clock-based controller – a major impact on money and water savings.” 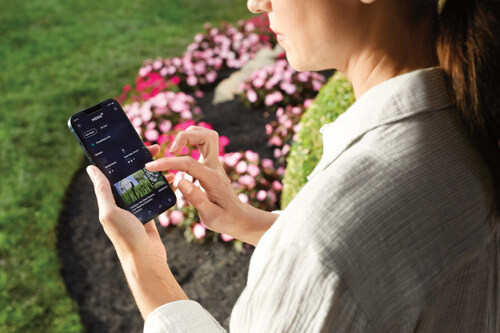 The smart sensors monitor data on zone moisture levels. They’re inserted into the ground, and then bring up measurements of soil moisture and temperature at variable depths, between one and five inches. These measurements are then shunted back to the smart controller app so users can adjust watering schedules where its required.

Moen will be showing them off at booth #52026 in the Venetian Expo Halls A-D at CES 2023 in Las Vegas from January 5-8, and on display at Mandalay Bay on January 3.

Stagwell (NASDAQ: STGW) announced the launch of a specialty media business unit to create new brand and performance inventory. The unit will be part of Stagwell’s marketing cloud, and will build formats offering brands ways to reach customers in interested in sports, travel, retail, news and dining.

“Stagwell is bringing new experiences to consumers whether they are at the stadium, in a restaurant or getting on an airplane. Along with these experiences come a wealth of creative marketing opportunities,” said Mark Penn, chairman and CEO, Stagwell. “Stagwell is at the forefront of these transformative technical innovations and new forms of richly targeted marketing.”

ARound is a shared augmented reality platform for stadiums. The Minnesota Twins and the Los Angeles Rams use it already. It uses 3D spatial computing to build venue maps and send content to individual users. This gives attendees the ability to see 3D effects, which opens up vistas for marketing and branding by offering more engagement options. These options include AR games, contests, and effects.

Stagwell’s marketing cloud is also developing a digital platform that connects to menus and point of sale systems to serve native ads. The platform gives brands customer profiles and provides a channel to place messages and content. For example, a company could promote wine pairings with specific meals, and collect data in return. 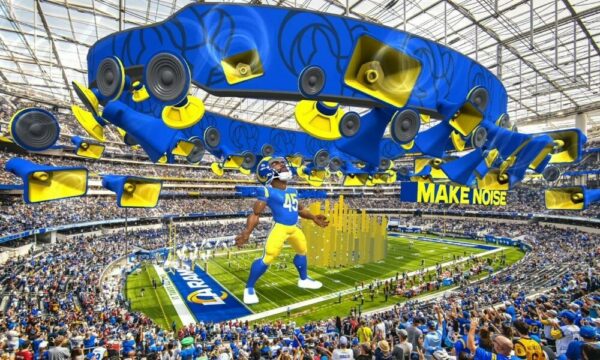 ARound image. Image via Stagwell.

Stagwell is essentially a marketing company that leverages augmented reality software to help customers punch-up their message. It delivers technologically-aided branding options for its clients, offering scaled 3D augmented reality experiences. It’s spread out over 34 countries and has over 13,000 specialists in its employ.

The company’s latest venture involves building a media marketplace for travel. In this case, it’s Stagwell’s Ink, a travel media company. Ink launched a travel marketplace where brands and get access to over 5 million passengers everyday.

The company also announced today that chairman and CEO, Mark Penn, will be presenting at the upcoming Needham Growth Conference on Wednesday, January 11, between 2:15 and 2:55 PM EST.

According to British expert, Nick Molden, the chief executive of Emissions Analytics the 80 miles per hour standard in places like Britain can generate considerable range penalties for EV batteries at speed. Also, a slight temperature change can change an EV’s range, with colder weather reducing range up to 40 per cent. As EV grows in popularity, advanced battery management systems (BMS) can help overcome stumbling blocks to widespread adoption.

“Automakers aim to get the most range possible out of their EVs, and accurate state-of-charge estimations are vital to achieve this,” said Sam Wong, general manager for BMS at TI. “Our new devices bring substantially higher precision to voltage and current measurement, giving automakers confidence to accurately measure an EV’s true range.”

Additionally, the volatage and currency synchronization mechanism allows for instantaneous monitoring of battery pack power. It also provides a real-time understanding of battery life. More specifically, the BQ79718-Q1 battery cell monitor and BQ79731-Q1 battery pack monitor offer accuracy and precision in battery voltage. The BQ79718-Q1 allows car manufacturers to maximize the range with high performance battery cell voltage measurements. These go as low as 1 mV of accuracy, and the battery allows the current to reduce down to 0.05 per cent of accuracy.

Bit Brother launches crypto-mining in the US despite market slump

It’s easy to look at Bitcoin’s price and think it’s a done technology, a fad from a decade ago which had its day and faded. Maybe akin to digital tulipmania. But there’s a strong probability that this slump is temporary and the prospect of another bitcoin halving could awaken the bulls yet again.  Mostly because they have every four years since Bitcoin’s emergence on the scene.

That’s why companies like Bit Brother Limited (NASDAQ: BTB) are eager to get on the scene.  For example, Bit Brother launched its crypto mining business in the United States under its New York-based subsidiary, Bit Brother New York (BTB NY). It did so and in the offing, inked and executed on a series of agreements. The first of which is with Pumpjack Power to power its mining facilities in the ERCOT Texas region.

It’s also signed into a subtenancy with Bolt as a sublessor, and also with Acme Commercial Properties, for 3,000 square feet of space.

The lease is for 47 months beginning January 13, 2023 with a base rent of $1,800 per month plus $431.66 in property insurance and property taxes. The site runs 6 MW of electrical power at a fixed block price that won’t exceed $50 per megawatt hour.

“It’s inspiring to see Bit Brother entered into the retail power sales agreement, cryptocurrency mining equipment purchase agreement, and the crypto mining site lease simultaneously in December 2022. It drew a perfecting ending for 2022. The initial achievements Bit Brother made constitute a firm step for its further journey in cryptocurrency and blockchain field,” said Ralph Jones, the CEO of BTB NY.

It was a year before the previous bitcoin halving when the price fluctuations started to shift and climb. The next Bitcoin halving is slated for March 2024 when the block reward drops to 3.125 bitcoins.

BTB NY bought 14,000 S19J Pro cryptocurrency miners from Grand Flourish to go in its space for roughly USD$2.3 million. The ASICs bring a total hash rate of 106 terahash per second and have six month warranties.